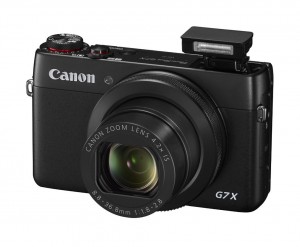 I recently bought a Canon Powershot G7X, which is Canon’s high-end compact camera to rival the Sony RX100 III

These are my initial thoughts on it:

I’m really liking it so far. In auto mode a variable size square locks on to what it thinks is the main subject of the photo and this is the focus point, which then adjusts automatically as it works out how much of the subject to keep in focus. It then automatically switches to what it thinks is the appropriate scene mode – so if it detects a face it will switch to portraiture mode and throw the background into blur. It even has facial recognition and can store up to 12 people, and in group shots will favour those people and prioritise them, making sure they come out the best. It even has blink detection. It’s rather too scarily clever for its own good!
You can override the auto-selection of the subject with the touch-screen and then as you move the camera around it tracks it. It’s a really cool feature.

At 390g it feels a little heavy compared to my old Panasonic DMC-SZ9 but not excessively so.

The only annoyance so far is that it seems that you can only charge the battery by removing it from the camera and charging it on the separate charger – it seems that not only does it not charge from its USB port when connected to a PC, it actually very quickly drains its battery on file transfers whilst connected. That’s a pretty big annoyance. (Edit: Some reviews seem to suggest that it *can* be charged via USB so I’m happy to be corrected. But that was not my experience)

The other annoyance is that there isn’t a dedicated wireless remote – you use an app on your smartphone for remote shooting. I would have preferred a system like the one used by the GoPro, which has a choice of using a smartphone or a dedicated remote.

I haven’t even begun to scratch the surface on its features or capabilities yet, so there is doubtless more to come. Those are my initial thoughts though.